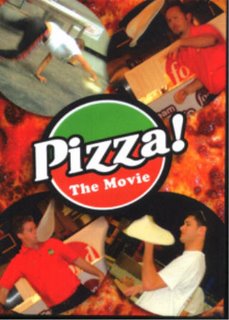 Pizza! The Movie,
A Review by Albert Grande, pizzatherapy.com

Pizza! The Movie was an ambitious project to begin with. On the surface making pizza seems simple enough. C'mon you make dough with water, yeast, salt and maybe add some olive oil. Stretch out the dough, throw on a little olive oil, some tomatoes, some cheese and pepperoni or whatever. It's easy. Right?

Not so to anyone who has made pizza from the heart, and certainly not for someone who makes a movie with heart about pizza. Pizza! The Movie will not be all things to all people. The film does not pretend to be. There will be pizza fans who are disappointed. After all fimmaker Michael Dorian had to narrow his focus.

Dorian has done an excellent job of hitting all of the high spots of pizza. He tackles New York Pizza. He discusses Chicago Deep Dish pizza. He uncovers the Chicago Deep Dish controversy. He travels the country from end to end searching out snippets and facts about the pizza culture.

He interviews Peter Reinhart of American Pie, he talks to Chris Bianco, of Pizzeria Bianco, I even noticed Gary Bimonte of Pepe's comparing good pizza to a home-run.

He uncovers several myths and tales about pizza. One of the brightest moments of the film is an uncensored interview with Ed LaDou. LaDou was the unsung creator of Wolfgang Puck's Pizza as well as the creator of the menu for California Pizza Kitchen. Ed LaDou is truly one the Legends of Pizza. Both Puck and the owners of CPK, understandably, declined to be interviewed for this film.

Dorian, however, needed a focus, to pull the movie together. The stage is set, the lights are dimmed. Enter Tony Gemignani, five time World Champion Pizza Thrower, owner of Pyzano's of California and head of the U.S. Pizza Team. Tony's struggles are chronicled as he faces a major dispute in a Pizza Tossing Championship. The drama unfolds as the two major pizza magazines of the pizza industry (PMQ and Pizza Today) are pitted against one another.

We follow Tony and his new team The World Pizza Champions to Italy to compete against other countries in Pizza Tossing, dough stretching and other pizza realted events. Tony shows his passion and emotions for all things pizza.

This is a must see film for anyone who ever enjoyed a pizza. This film captures the taste and essence of pizza right up to the end. The use of Joe Dolce's incredible anthem "Pizza, Pizza", for the closing credits, is a clever addition.

My only complaint: Dorian should rename the film Pizza! The Movie, Volume Number 1
I am sure there is enough material left on the cutting room floor for several other Pizza! The Movies, Volumes 2,3,4 and 5! I can't wait. Pizza on Earth...
Posted by pizzatherapy at Monday, April 17, 2006

Hi Albert,
I enjoyed your review of Pizza, the Movie and your comments on Gary Bimonte and Chris Bianco.

Those are the guys, the real pizza heros--I just write about them and try to emulate their passion and humility.

Keep an eye out for the next generation of great American pizzaioli--they're coming
round the bend and will soon change the pizza landscape across the nation.

My prediction for the nextsuperstar of pizza is Brian
Spangler, of ApizzaScholls in Portland,Oregon. The locals have discovered him and it's only a matter time before he joins Chris Bianco as a James Beard award
winner.

As you know, my focus is always first on the dough, the crust. No pizza can truly be memorable without a great crust no matter how creative
the toppings.

Brian was already a well known artisan bread baker before he
opened his pizzeria with his wife, Kim, and now he's putting all his baking skill into pizzas that express his unique vision of just how great a pizza can be on every level.

Anyway, just wanted to thank you for your support of my work but, more importantly, for all you've done for pizza lovers everywhere.
You have created a virtual village where we can all share our common
bond--the love of pizza. May all of our pizzas always be perfect!

Pizza what a great movie as you already know. I just got back from the Newport Beach Independent Film Festival for one of the premeires. I had a chance to talk to several people who saw the movie and everyone loved it. They could not beleive that our industry was so complex. I feel that Michae Dorian did an excellnt job telling the audience several stories about the pizza industry from Naples to New York and Chicago, The World Pizza Championships, Delivery Drivers, CA Pizza, Pizza Magazines and Super Heros. Making what could have been a 12 hour movie into a 90 minute movie is pretty impresive. I enjoyed the history & Artisan aspect of the movie. Seeing guys like Grimaldi, Di Fara, Bianco, Reinhart, Pepe from Antica, Barry O Halloran, ED Ladou, and several others were exciting to me because I respect them all and sometimes these artists don't get the acknowledgments they deserve. I was happy to see that one of the main story lines was about the pizza acrobats and all my guys. Back in the 90's I had a lot of people tell me " Why? or What For?" when I was trying to promote this art. It was hard and a lot of people couldn't understand the importance and value that pizza throwing could be to ones pizzeria and the entrie pizza industry. Now after PIZZA the Movie I think they will get the picure. Thanks again Albert for your wonderfull and imformative web site. There are not too many outlets for pizza and your is one of the first and one of the best

Thanks for creating the only site on the internet that has me pulling on my moustache all day looking for that all-too-familiar flavor. :}

I never really saw anybody make a pizza, I'm used to the pizza from Pizza Hut or Papa Johns. Your pizza was very good. I enjoyed eating homemade pizza, I'm going to try to make one myself.


I liked the pizza you made and I want to make the same one with the recipe that you have.

I really enjoyed the pizza that you have made for us. I hope to see you again to eat more pizza. Thank You.


You the man! I enjoyed the pizza that you made. How about you come again and make some more so we can have some more grinds....
TORAN KOBAYASHI


I REALLY LIKE THE PIZZA! IT WAS ORIGINAL AND DIFFERENT AND VERY DELICIOUS! THANKS FOR COMING -I THINK AT THE END OF THE YEAR YOU SHOULD COME AGAIN!
KAYLE DOWIS 10TH GRADE WAIALUA HIGH

I loved the pizza that you made for us. It inspired me so muc when I got home that I would want to make pizza also just like you- thats how much I liked it! I would want to receive your recipes if that is okay with you for FREE =D. if you decide to let me have your free recipes please email me at 'island_chica_8o8@hotmail/yahoo.com'or also please give them to mrs. wright or at least come by our class again to make it for lunch so that we dont have to spend $1 on a junk lunch that doesnt even make you full.
much mahalos
irene guzman 10th grade waialua high school


I really liked your pizza. It tastes very good. Yes you did a very good job even though you cut your finger, but it still tasted good.
Keola Adric 10th grade
Waialua high school.


I liked the pizza that you made, it tasted really good. I liked the stories you told us and you made us laugh.
Saray Sok, Waialua high school 10th grade.


Mr.Grande i liked the pizza☺.It was good plus you telled us stories and that was good.
Jordan Braceros
Waialua High School
10th grade.

Al,
I enjoyed the Pizza presentation. The steps you took to create such a delicious pizza looked easy enough to follow for the students and myself as well. Thank You for your expertise and hope to have the opportunity to create a great tasting pizza recipe from your site.
Aloha Lavina Forvilly
Waialua High School
Skills Trainer

Albert,
I just discovered your site and am greatly encouraged. Your spiritual bent is refreshing as I have always believed that working with food and especially dough bridges a path between man and God.
Peters comments on the focus being on the crust certainly reflect his commitment and personal investment in making bread. It is hard to escape our own biases. Everyone has their own pre-conceptions, misconceptions and expectations relating to pizza. With all respect to Peter, the crust is an integral componant of pizza making, but by itself does not describe a pizzas quality, as much as contribute greatly to it.
Many assume that because of my association with creative toppings, I have relegating the importance of the dough to a lesser importance. Not so. It is one of the things that makes pizza such a dynamic food style.
What I enjoy is navigating through these many opinions, attitudes and beliefs and to reach out to satisfy through my craft as many expectations and preferences as I can.
I have been in this business for enough years as to acquire a certain perspective. I don't mind dispelling a few myths or calling things as I see them along the way.

Every now and then I post these veiws and perspectives in the caiotipizzacafe.com website. I have included a feature called "About The Craft".

Thanks for an excellent web site and I hope our paths cross. Keep up the good work. Ed LaDou
caioti@earthlink.net

Hello! I'm from Romania and surfing the blogs I found very interesting and useful blog about your pizza. Talk about the extraordinary products and see that they are very popular with visitors to this blog. And I am in a blog about home delivery pizza-Pizza-Livrare la domiciliu Bucuresti-If you want to do an exchange of links let me know and put a link each other in the category links.

I never tasted your pizza, it looks good. Im here cuz im looking for Jason Oga. and if youre reading this jason, ive been looking for you everywhere. haha. i left wailua and i moved to kauai but im still here.
contact me please:
Skatensurf2005@yahoo.com
take care
Paula