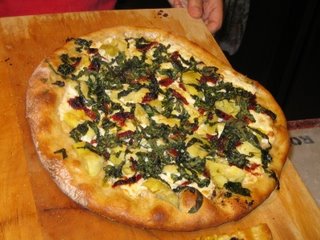 We were invited by noted pizzaiolo, Jon F. and Sandi to experience some home-made pizza at their home in Westerly, Rhode Island, last night.

He cranked up his oven to a sizzling 550F an hour before he placed his pizzas in the oven. He explained the importance of the high oven

temeprature. His pizza stone was very hot and this allowed him to cook the pizza dough to perfection. I lamented my own situation, as I explained my home oven only goes up to 500F.

He created three masterpieces. The first was a simple Tomato and Romano cheese pizza. This was lightly spiced with no salt added. The taste of the crust was able to shine through. I would have to agree. The crust was airy, yet full bodied. Jon confessed that he added no olive oil to the dough. He was attempting to create an authentic Italian dough as created in Naples.

Who was I to argue with his incredible results? The crust was memorable.

The second pizza was a tribute to a noted French Chef. The pizza was very unusual as it contained Gruyere cheese, dried olives, toasted pine nuts, chopped fresh chives, and lightly sauteed yellow peppers. The taste was understated yet quite memorable. The flavors complimented each other quite well. He honored his mentor by making this pizza, a superb delight.

These pizzas were each memorable. I asked for the recipes and finally Jon F. said he would share them.

As good as the toppings were for each of these pizzas, I felt the king was the crust.

Jon F., has, as always, taken his pizzas to a new level of enjoyment. He has proven once again, that there is a great level of satisifaction which can be attained by the home pizza maker.

Thank you Jon. Thank you Sandi. You have truly allowed me to experience "Pizza on Earth..."

I am actually setting up a site that will be dedicated to the best pizza restaurant in westerly rhode island!

Check it out! Westerly Pizza Restaurant