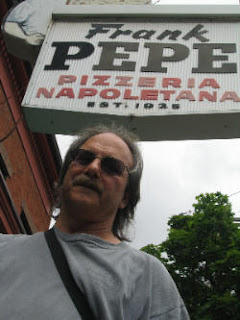 Albert at Pepe's on Wooster Street
Hey we knew it all the time.

Frank Pepe's Pizzeria Napoletana in New Haven, Connecticut, makes some of the best pizza on the planet.

It's always nice to get global recognition, however.

An article written by, Killian Fox from the Observer lists the 50 Best Things to Eat in the World.

Right there at Number 31, is Pepe's!
Here is what he said:

"You could generate enough heat to fuel a brick oven with the argument over which country bakes the world's best pizza: Italy, where the concept originated, or America, where it was globalised.

Neapolitan purists will make pilgrimages to hotspots such as La Sorrentina, outside Naples, whose chef has won the prestigious Naples Pizza Championship, but we contend that the upstart Yanks do it better.

The best American pizza can be found, not in New York as is commonly assumed, but in New Haven, Connecticut, where the Pepe family has been spinning dough since 1925. Their white clam pie has no equals."
Here is the link to the rest of the article.

Not bad for a guy who started to sell pizza from the top of his head!

Congratulations to everyone in the Pepe's Family.

pizza all over New Haven,

albert
Pizza on Earth...
If you are looking for the Best Pizza in the World, go here.

And if you are nterested in finding 50 great songs, look no further...

Posted by pizzatherapy at Thursday, September 17, 2009

I'll take American pizza anyday!
I lived in Europe a good while, and I ate a lot of Italian pizza, and I sure did miss American.
However, it was not so much the pizza itself as it was the difference in the meats that made the difference, like pepperoni.